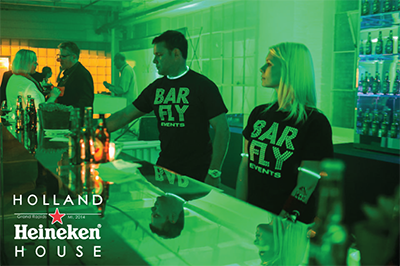 The West Michigan Global Initiative invites local, national and global leaders to share ideas and foster business, political and cultural relationships between the West Michigan business community and their counterparts in the Netherlands.

In the fall of 2014 WMGI brought a Delegation from the Netherlands to West Michigan with a focus on Food Agriculture and the Medical Device field in our region.  During the course of three days the group toured leading businesses in our region, making connections, and lasting relationships.  By interacting with other executives of featured businesses in a non-competive enviornment helps diversify discussions facilitated by subject matter with other experts in attendence.  Participants leave with a new perspective, strategic networks relevant across our two nations.

At the culmination of the three day venture we held the very first Heineken House in Grand Rapids, Michigan.  It was said so be the social event of the year.  WMGI, stepped away from the standard Gala and opted for a house party held downtown Grand Rapids, in the Lofts Apartments, two story parking garage.  On one level guests enjoyed music from an artist popular in the Netherlands.  On the second, DJ Shannon Wiliams, combined video, light, and sound.  All food stations were action stations with beer pairing from Founders Brewery.  The only way to get between the two floors, guests had to be taken by a car freight elevator.

The stage was set for guests to relax and mingle, all the while being decked out in orange.

The Heinenken House was a success.  Its success was due to many factors, but the biggest contributing factor was the participants.  WMGI wouldn’t be the organization it is without those dedicated to cultivating relationships between the West Michigan business community and their counterparts in the Netherlands.